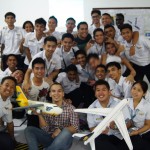 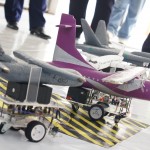 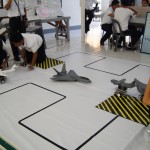 ‘Aircraft Mobile Robots’ was the highlight of the project exhibit conducted by the Avionics Technology (AVT) department  last March 15 at the ground floor of the new HRM-TTM building. The event showcased the various projects made by the First and Second year AVT students under the courses handled by Engr. Cyril Neil M. De la Rama. These include: The simulation of the aircraft mobile robots or technically called ‘line follower robots (LFR)’ wowed the audience with its ability to detect and follow a route delimited by a black line with a white background. The system was embedded with phototransistors that function as detectors to measure the light reflectivity of the surface, thus making the robot detect and follow a line drawn on the surface. The ‘Morse Code Your Name: Ask Me How” booth operated by the Second year students, was also showcased during the event on the conventional way of encoding information or messages using telegraph kits. Spearheaded by De la Rama and organized by the students themselves, the exhibit served as the culminating activity of the Avionics department for the entire semester. by:  Cherissa Y. Latoja AVT-III